One of the most amazing life time experiences began  Saturday 27th of August which was the start of the National Whale and Dolphin week where our crew  at Newquay Sea Safaris and Fishing were recording all of the huge variety of our fantastic Marine Wildlife we were seeing here during our sea safaris and diving trips off the Newquay Coast  and sending them in ,to add to a huge uk data base. Dave Jarvis..Area Manager for British Divers Marine Life Rescue contacted us to say there were approximately 100 Dolphins moving up from St Ives in a Newquay direction. It was thought they may be a superpod of Bottlenose Dolphins which would have been incredible as we only have a Celtic inshore population of 30 on the fin photo ID Database. We as a Master WISE ( wildlife safe) dedicated boat and Marine Mammal Medics were tasked to establish the identity of the pod. Atlantic Diver our 10m catamaran had gone aground after a busy day’s wildlife watching, so we called Dan Murphy who was conducting a Seawatch at St Agnes Head for “Seaquest Southwest” ..a project run by Cornwall Wildlife Trust whereby volunteers record an effort based survey of Marine Wildlife from dedicated cliff top points on certain Sundays throughout the year, in an effort to establish wildlife hotspots which could aid conservation measures in the near future. Dan said he could see at least 100 Common Dolphins and also about 11 Bottlenose dolphins from their position and they were heading toward us…..eagerly as the boat floated we stealtherly made our way out of Newquay Harbour with a few friends and family on board. Carefully we made our way out passed the Headland and began spotting for that iconic sight of a fin breaking the water’s surface. The light was fading and the sea looked flat and dark against the heavy skyline, then suddenly there was a splash to our port side followed by a dolphin porpoising out of the water and leaping head first back down, followed by another surfacing with a hugely tall eerily pale Fin…oh my God….Risso’s Dolphins.!!!! 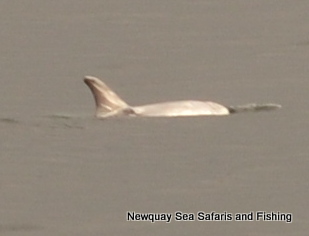 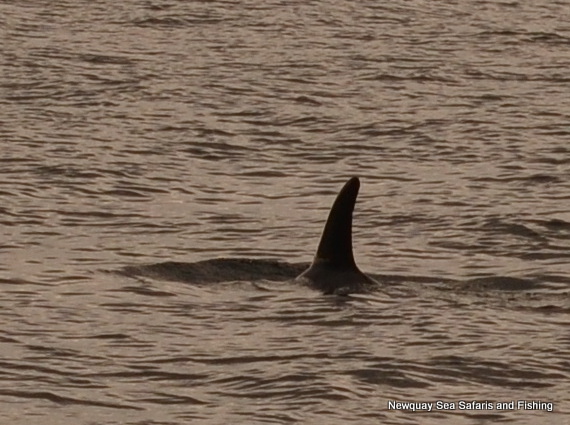 atchers on board were ecstatic, this is indeed a rare sighting for us off Newquay and I have only ever seen one before at a stranding  on Perranporth beach that we successfully rescued in May2012. Chris Lowe my hubbie and skipper cut the engines and we floated quietly on the sea and feasted our eyes in a hushed silence in awe of the spectacular hunting and feeding of at least 7 Risso’s Dolphins which surface about every 5-6 minutes with their beakless heads turning on the side on the odd occasion to glance a look back up at us. Usually a boat shy Dolphin they came ever closer as they worked their way through a planktonic slick. Their colours varried throughout the pod from three smaller ,ghostly pale, white coloured younger dolphins which we could see through the incredibly clear water as they swam beneath the waves to larger very dark grey , almost black larger dolphins with deep white scars through their dorsel fins and bulbous heads. Goosebumps prickled up on my arms as we enjoyed the rare spectacle and pronounced ourselves the luckiest ***** ever!!!! As the night drew in darker we made back for port  feeling full of uplifting joy and leaving this rare and beautiful pod to continue its nightime feeding . 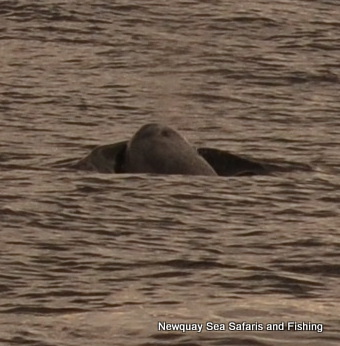 We are sharing the data of these sightings with other  Marine Wildlife Boats via a new group that has been set up this year called “Cornwall Marine Life Boat Operators” which at present is a collaboration of five founder members of Cornish Wildlife Boats spread around the beautiful Coastline…Marine Discovery, Newquay Sea Safaris and Fishing , Orca Sea Safaris, Padstow Sealife Safaris and Charles Hood and also other active Marinelife Group leaders. The aim is as “Marine Champions” to premote watching wildlife without causing disturbance and to share our data for the benefit of future conservation and research accessibility for other academics , whilst educating members of the public about these wonderful creatures in the hope that as a collective we lead by example and ulitimately encourage others to safeguard our oceans and protect the habitat that the Flora and Fauna need to survive. By  watching our wildlife safely we are ensuring that they  are there for future generations to enjoy.

Our Sea Safaris will be running daily throughout the next few months, to book please call 07582 466122.

….what a wonderful place Newquay is!!