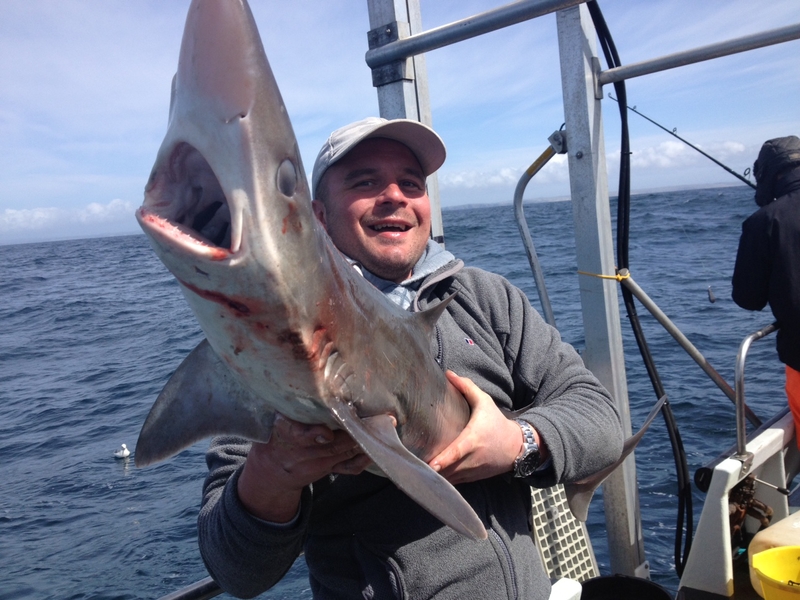 The first Basking Shark was sighted about 8 miles off Newquay this week, spotted by Daniel ..a Commercial Potter ( with thanks) feeding open mouthed at the surface. Other sightings have also been coming in as 1 in falmouth, 2 off Porth Kerris, 1 off Landsend and 2 in Lundy..the warmer weather has helped the Zooplankton to rise ,so the harmless plankton feeding sharks are feeding at surface. Today a happy angler also caught a very large Tope , weighing in at 22lbs and 1.8m in length. The male shark circled around the boat and entangled the anglers' lines, reminiscent of a scene from "Jaws", before being brought onboard "Atlantic Diver" to be measured and recorded for the Shark Trust and Substance. It was then very carefully released…keeping these sharks in a horizontal position helps to protect the soft internal organs so that a successfull release is possible. These sharks are known as the "Soup Fin" shark and don't eat people but instead eat fish, crustacean,endinderms and worms. They are usually bottom feeders. Our fishing and sea safaris are running daily aboard our two top, large catamarans. Mackerel are coming in well today.