Unbelievably awesome Common Dolphin activity this week as we were recording cetacean for Whales and Dolphin Watching Week. We came across no fewer than six pods of Common Dolphins on one day alone , let alone Bottlenose Dolphins on two consecutive days complete with juveniles and Harbour porpoise. It was a great week until the british weather moved in but out there again today. 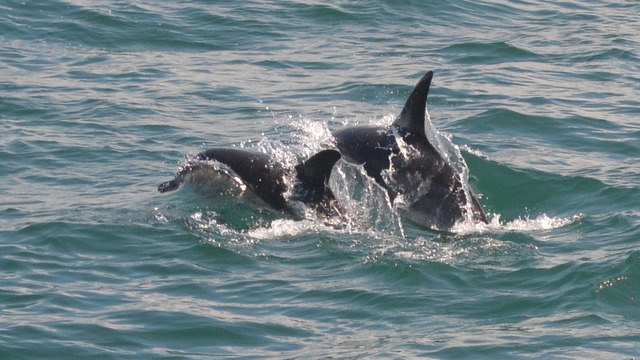 The dolphins were feeding on sand eels which were in turn feeding on phytoplankton which was trapped at the sea surface. The Dolphins were coraling the shoals up tightly at the surface by porpoising closely together …gathering the shoal , whilst others under the shoal blew air bubbles upwards to keep the fish from swimming down. Then annnd here come sthe amazing part ….the dolphins now having trapped the sand eels ata the surface Hydro Planed , beaks open wide and scooped the eels up in lines of ridgid backed sinchronised rows of dolphins. The spalsh they created doing this was phenominal.

We sat and watched at a distance for ages as they fed in a huge area around us.